I have read an article about what is a full-stack designer, which referred to the so-called full-stack designer who is able to build wireframes, prototypes, make visual drafts, and coding. Put it into the product design process, that kind of people is an unicorn who can handle everything. Whereas, one of the most primitive and most critical step is the wireframe or prototype design. The importance of prototyping design is equivalent to the solid foundation of the superstructure. Then the tools to build the foundation is very important.

How many popular prototyping tools are available?

So many prototyping tools for designer’s choice, but the novice designers are much more than the tools. They usually don’t know how many tools are available for choice, and even don’t know how to make a right choice. Some people told them, Axure is a good software. So, they use Axure. However, I think, they should make an analysis on the mockup & wireframing design tools & Apps for UI/UX designers and make a right choice. Axure is not very proper to get started for beginners, there are more choices other than it. Then, what are the commonly used prototyping tools besides Axure? Let’shave a look.

Put aside the influence of Axure, the veteran prototyping tools, the most popular prototyping tool in China is Mockplus. From the initial lightweight online version to the full-featured desktop version at present, Mockplus gradually developed and expanded its features to become a powerful prototyping software. With the extensive pre-designed interactive components (200) and a huge library of icons (3,000), it’s easy and fast to create an interactive prototype in 3 seconds.The recently launched Mockplus3.0 version with team collaboration function is a highlight. The sophisticated collaborative design, online review, and page division editing, that all greatly enhance the team efficiency and reduces communication costs.

As a novice, you must admire the designers who can create the elaborate high fidelity prototypes. Moreover, you will know that’s made by Justinmind. Some designers are pursuing the delicate details on rich interaction effects and gestures supported on the mobile APPs by the software. But you can’t ignore the huge time cost and effort spent behind the high fidelity prototype. So it’s not a good choice for beginners.

Strictly speaking, Invision has a great difference with the prototyping tools mentioned above. Its role is to add jump links on well-designed visual scripts and generate online prototypes.

How to choose a right prototyping tool?

For me, I think a right prototyping tool should be with the following features:

2. Supported for previewing on mobile devices at anywhere and anytime;

4. Support to generate a flow chart;

These prototyping tools and experience on software choosing are summed up by many product designers for years. It’s no doubt that there are not only Mockplus and Axure for the first choice, and the standards to choose tools to vary from person to person. Anyway, the most important are that the tool is more easy to use, the better

Axure has launched three versions: Pro, Team, and Enterprise. But the support for the perpetual license, that is limited to users who have already purchased the Professional or Team Edition. In the Axure RP 8.0 version, users can purchase license key at the price of $ 495 and $ 895. Moreover, once you purchased the perpetual license, you can have the software update for free in your lifetime. 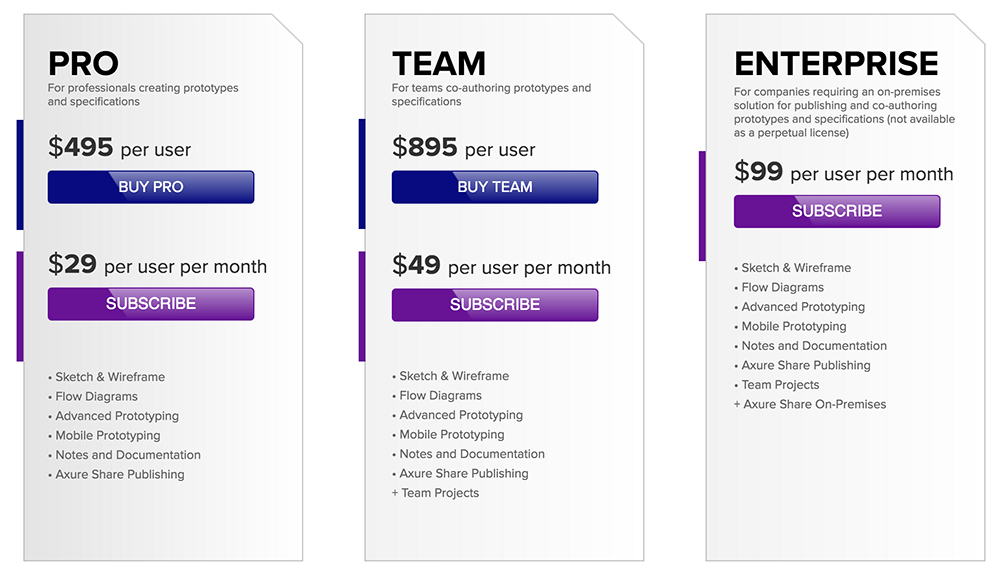 Justinmind provides subscribe and perpetual license for users. Whichever mode is selected, the user can experience all the Pro features. In terms of pricing, the perpetual license edition of Justinmind keeps consistent with Axure, both positioned at $495. But what worth saying is that, the perpetual licenses include minor and major version updates for 1 year. If you want to get new versions after the first year, the maintenance needs to be renewed each year for $99 per user. 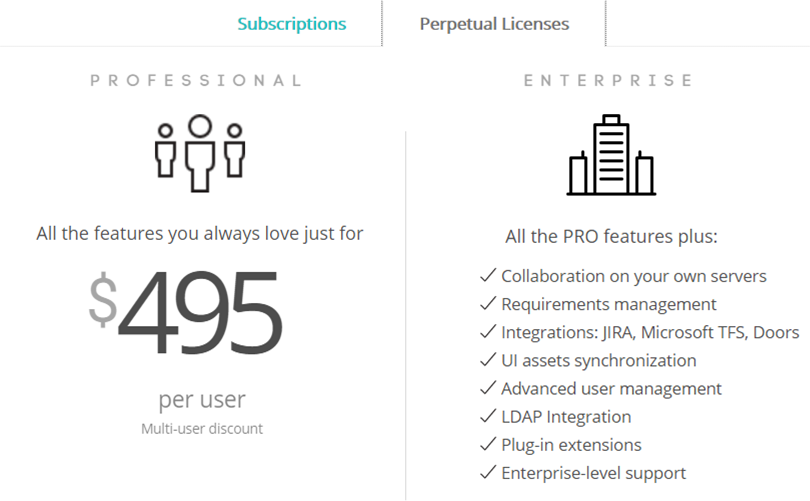 Compared with the pricing strategy of Axure, Justinmind, Balsamiq offers more options based on the user’s different requirement. They can choose the volume license or upgrade license, as well as the single user license at the price of $89. According to the website, Mockups 3 for Desktop is a one time purchase; there are no maintenance costs for the license. Licenses are tied to humans, not a particular machine. But the site does not directly tell the user whether an additional purchase fee of upgrading is required. But with careful reading of the document, you can find that the major-version updates will have an additional cost.

Mockplus also launched a perpetual license version in its 2.3 version at the price of $399. Users can enjoy all the professional features, such as exporting HTML, cloud sync, 3000+ icons, and so on. Compared with competitors, the advantage of Mockplus’s perpetual license is not only in its cheap price, good quality after-sales service. The most important is that the perpetual license of Mockplus is the only one that has no any additional fees or conditions: once purchase, lifelong use, and free update for the future versions. I think nobody will refuse a good prototyping tool that has no any additional fee with one time purchasing, but you can enjoy all the pro features. 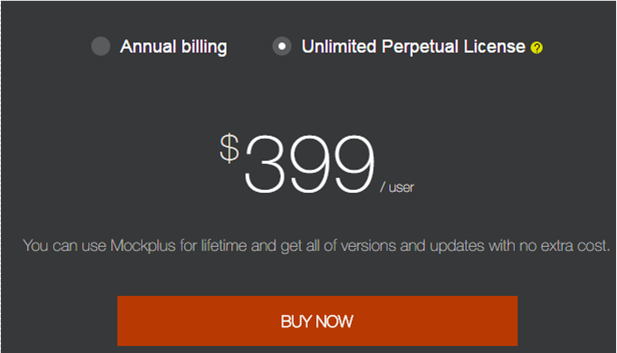 The essence of perpetual license is the commitment of the software developers for their users and the confidence of their future development. The choice of designer for prototyping tool is not only because it’s simple and easy to use, fundamentally speaking, that is because they trust in the software and their manufacturers.

In general, pen and paper prototyping is most often used to display conceptions in the product development process. Which processes simply and rapidly with a brief sketch. But you still have a lot of work to do, if you want to get the wireframes to be more perfect. On YouTube, somebody shows a paper-based prototype for Daum’s webmail service. All the button clicks and page interactions displayed logically and clearly by two people cooperated with each other. While time is money and everything at this quick tempo environment. Some users wondered how long it takes to rehearsal for the presentation. The more worried is the sequence of the paper pieces, and the problem of documents missing.

Comparatively, employing with a variety of wireframing/prototyping tools is a more advanced operation. So many introduction or summary of such tools explosively listed. But, do you really know how to use it? Maybe some of you are eager to find out the video tutorial on YouTube or somewhere. It is better to teach you how to do it better than only names. There are some video tutorials of the frequently-used tools. Just take a look.

Balsamiq Mockups started in 2008 in California. It is the pioneer of hand-drawn style prototyping tool and reproduces the experience of sketching on a whiteboard. It is a simple wireframing tool, which means it cannot use to make the interactive prototype. To help users learn better and faster, a 3-minute video tutorial shows at the home page. More detailed tutorials are available on YouTube, such as this Balsamiq Tutorial with 65K + views, which created in November 2013.

Mockplus is a simple and easy-to-learn interactive prototyping tool. Which interaction design is fully visualized, that’s WYSIWYG. It’s unique link points allowing you to create interactions between components and page drag and drop easily. A 10 minutes video tutorial available at the Tutorial page, that is, learning right, using right. Also, you can find more tutorials on YouTube, then you will learn that Mockplus could help you to achieve the more advanced and complicated interaction effects. Its comparative advantage could see from the “30 seconds prototyping with Mockplus”. Mockplus tutorial has accumulated 10K + views within a few months.

Sketch is a vector drawing application for all designers. Vector graphics is currently the best way to conduct web pages, icons, and interface design. Experienced designers spend a few hours can use it well with their own design skills in Sketch. If you are a beginner and don’t know how it works, simply follow the tutorial videos. LevelUpTuts’ Sketch App Tutorials Series Introduction, which has 300K + views will teach you well in learning Sketch.

Strictly speaking, InVision not an interaction design tool, but it can help designers and design teams to do prototyping more efficiently. Creating an online prototype requires only four parts: creating a project, uploading visual design drafts, adding links, and generating online prototypes to communicate with colleagues, users, and get feedback. A 3-minute video tutorial available on it’s website for a quick overview of Invision. Similarly, you can go to YouTube to find more detailed Invision video tutorial.


How to Be A Completely Failed UX Designer?

What Kind of Prototypes and Design Tools You Need for Your Audience?

100 Excuses for Designers — Because sometimes you need one! (by Jon Moore)