In an effort to install various apps in Ubuntu or other Linux distribution, we often add several PPA. Most of the times these PPAs are managed by a single developer as he might have created a certain app for personal amusement or as a hobby. Over times these PPAs might not be updated with latest version of operating system. This might create trouble when you try updating your OS. You may have other reasons as well for deleting or removing a PPA from the source list.

HOW TO REMOVE A PPA:

There are several ways to remove a PPA in Ubuntu. You can do it from Software Sources list, by removing the source files from the directory or the simplest way by using apt. There are different advantages of all of them. We’ll see all methods to delete a PPA in detail:

1. REMOVE A PPA FROM SOFTWARE SOURCES VIA GUI:

This method is apt for those of you who prefer to use GUI over command line. While you are using Linux, I highly recommend that you use command line. But lets see how to remove PPA in graphical manner.

Go to Unity dash (by pressing the super or Windows key) and search for Software Sources:

In the Software Sources, go to Other Software tab and choose the desire PPA from the list. Afterwards click on Remove to remove it:

Mostly, you add a PPA using add-apt. We’ll use same add-apt to remove a PPA.Use the following command in terminal:

In the above command replace PPA_Name with the desired PPA name. By this time you might have realized that you need to know the exact PPA name to use this otherwise straight forward method.

3. REMOVE A PPA FROM THE SOURCE LIST IN TERMINAL:

Alternatively, you can remove the PPA from sources list where these PPAs are stored. PPAs are store in the form of PPA_Name.list. Use the following command to see all the PPAs added in your system:

Look for your desire PPA here and then remove the PPA using the following command:

4. REMOVE A PPA BY USING PPA-PURGE IN TERMINAL:

You might have noticed that in all the above three methods we only talked about deleting or removing a PPA. What about the applications installed using these PPAs? Will they be removed as a result of removing the PPA? The answer is NO. So this is when PPA purge comes in picture. It not only removes the PPA but also uninstalls all the programs installed by the PPA.

Now use it in following manner to purge the PPA:

The URL of the PPA can be found in the Software Sources list.

I hope you’ll find at least one good method to delete or remove a PPA and uninstall the corresponding applications.

Linux has become so user-friendly nowadays that there is less and less need to use the command line. However, the commands and shell scripts remained powerful for advanced users to be able to do more complicated tasks quickly and efficiently.

With the vast number of commands available, you have to know loads of commands and how to effectively use them. But there is really no need to memorize everything since there are many cheat sheets available on the internet and books. We have here a collection of 6 Linux/Unix cheat sheets that can greatly help you when you are stuck and need a reference.

In this cheat sheet you will find a bunch of the most common Linux commands that you’re likely to use on a regular basis. 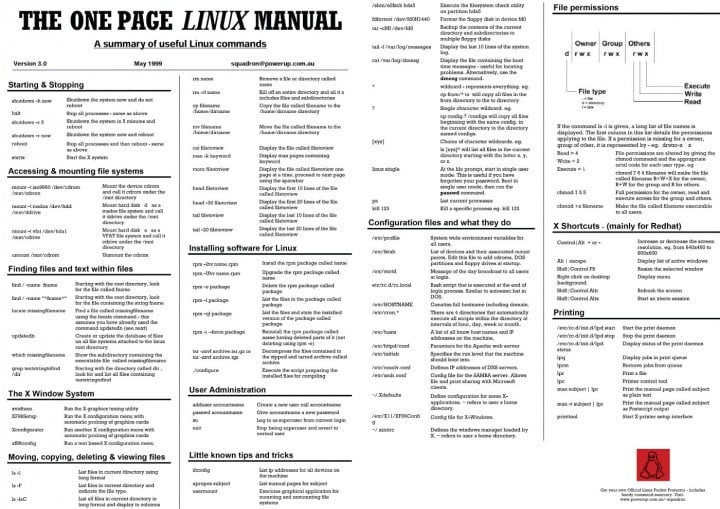 Source: The One Page Linux Manual

Keep this linux cheat sheet on your desk printed , I am sure you will learn them quick and will be a linux expert very soon.

The origin of this cheat sheet is a Danish blog. But they have some useful cheat sheets which could be used as a wallpaper. It’s definitely useful when it is easily accessible from your desktop at any time.

A cheat sheet with the most used commands for Linux. 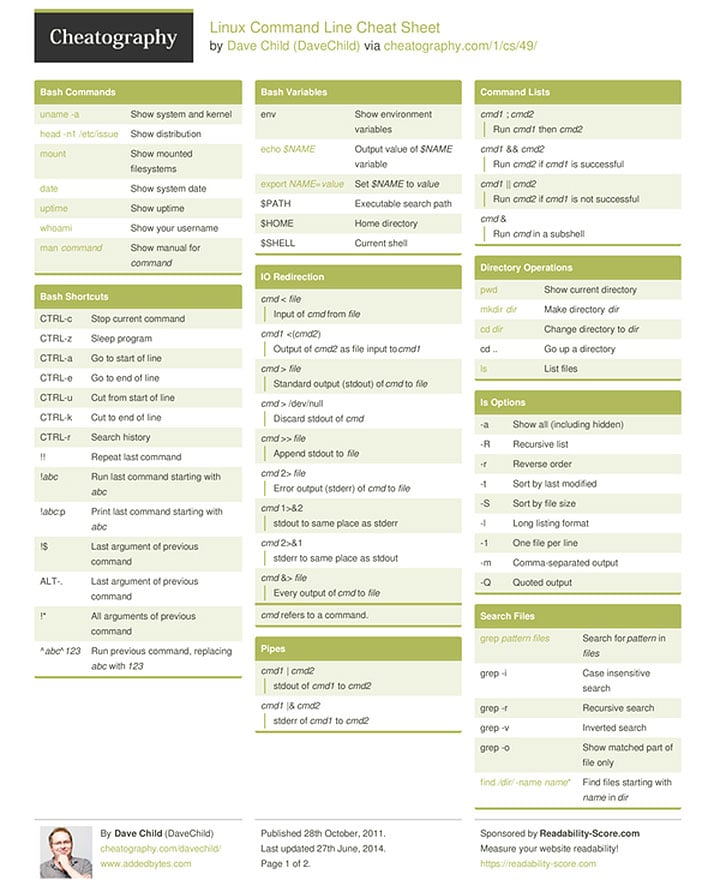 Open-source Linux is a popular alternative to Microsoft Windows, and if you choose to use this low-cost or free operating system, you need to know some basic Linux commands to make your system smoothly. The most common Linux commands are shown in this table.

Ubuntu and Linux Mint are two of the most popular desktop Linux distributions at the moment. If you’re looking to take the dive into Linux – or you’ve already used Ubuntu or Mint – you wonder how they’re different.

Linux Mint and Ubuntu are closely related — Mint is based on Ubuntu. Although they were very similar at first, Ubuntu and Linux Mint have become increasingly different Linux distributions with different philosophies over time.

Ubuntu and other Linux distributions contain open-source software, so anyone can modify it, remix, and roll their own versions. Linux Mint’s first stable version, “Barbara,” was released in 2006. Barbara was a lightly customized Ubuntu system with a different theme and slightly different default software. Its major differentiating feature was its inclusion of proprietary software like Flash and Java, in addition to patent-encumbered codecs for playing MP3s and other types of multimedia. This software is included in Ubuntu’s repositories, but isn’t included on the Ubuntu disc. Many users liked Mint for the convenience installing the stuff by default, in contrast to Ubuntu’s more idealistic approach.

Over time, Mint differentiated itself from Ubuntu further, customizing the desktop and including a custom main menu and their own configuration tools. Mint is still based on Ubuntu – with the exception of Mint’s Debian Edition, which is based on Debian (Ubuntu itself is actually based on Debian).

With Ubuntu’s launch of the Unity desktop, Mint picked up additional steam. Instead of rolling the Unity desktop into Mint, Mint’s developers listened to their users and saw an opportunity to provide a different desktop experience from Ubuntu.

Ubuntu includes the Unity desktop by default, although you can install a wide variety of additional desktop environments from Ubuntu’s repositories and third-party personal package archives (PPAs). Mint’s latest release comes in two versions, each with a different desktop: Cinnamon and MATE. Cinnamon is a more forward-looking desktop that builds on new technologies without throwing out standard desktop elements – for example, Cinnamon actually has a taskbar and an applications menu that doesn’t take over your entire screen. MATE is a fork of the old GNOME 2 desktop that Ubuntu and Linux Mint previously used, and it works similarly. It uses MATE’s custom menu. You’ll also notice that Mint has a more toned down and lighter color scheme Its window buttons are also on the right side of the window title bar instead of the left.

Mint still includes proprietary software (like Flash) and codecs out-of-the-box, but this has become less of a differentiating feature. The latest versions of Ubuntu allow you to enable a single check box during installation and Ubuntu will automatically grab the proprietary software and codecs you need, without any additional work required. These days, Mint seems to offer more configurability than Ubuntu out-of-the-box. Whereas Ubuntu’s Unity only includes a few options in the latest version of Ubuntu, there’s an entire settings application for configuring the Cinnamon desktop. The latest version of Mint, “Maya,” also includes the MDM display manager, which is based on the old GNOME Display Manager. Whereas Ubuntu doesn’t ship with any graphical configuration tools for tweaking its login screen, Mint ships with an administration panel that can customize the Login Screen. While Ubuntu is still based on Linux and is configurable under-the-hood, many pieces of Ubuntu software aren’t very configurable. For example, Ubuntu’s Unity desktop has very few options.


Ubuntu’s latest versions are more of a break from the past, dispensing with the more traditional desktop environment and large amount of configuration options. Mint retains these, and feels more familiar.

Keep this linux cheat sheet on your desk printed, I am sure you will learn them quick and will be a linux expert very soon. We have added had both pdf and image (png) format of the cheat sheet. Please keep us posted if you need us to add more commands. Command are categorized 13 sections according its usage.We have designed the command in white color with black background as we often use on linux shell. We have added bit color for attraction :-).

We have grouped commands in the below categories

Download linux cheat sheet in pdf format and refer each command in detail.